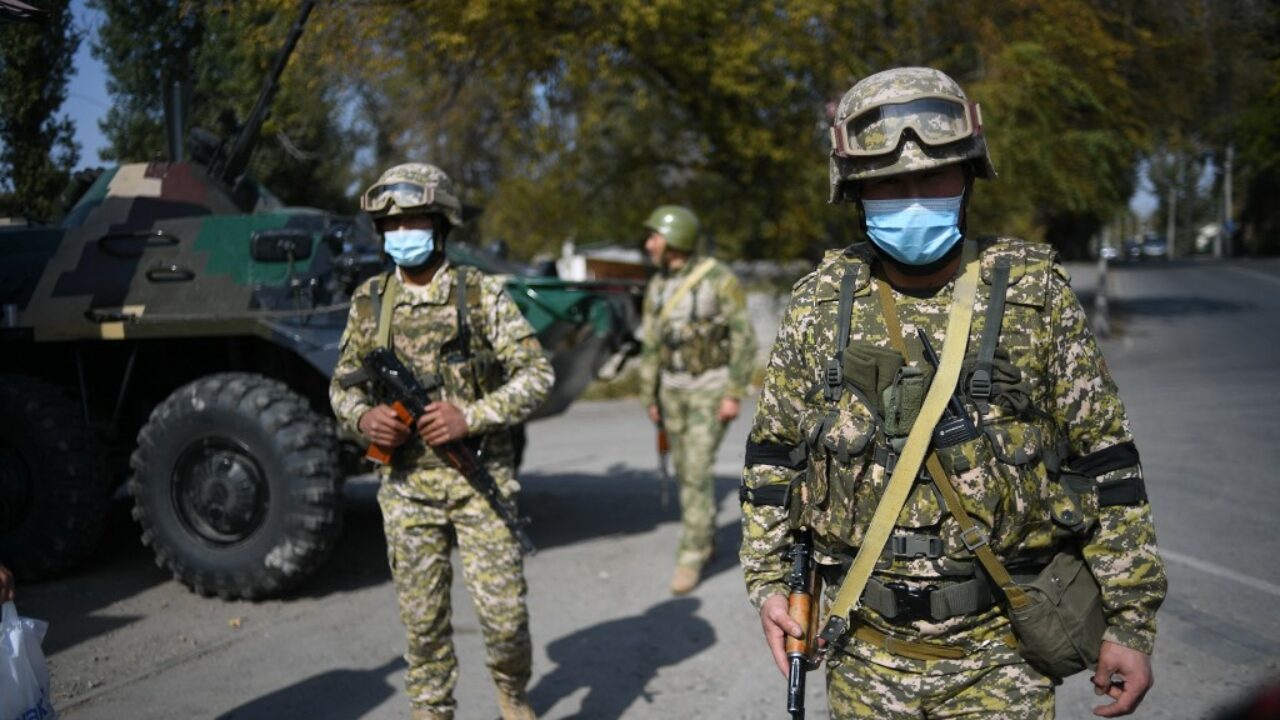 On April 29, 2021 clashes at the Kyrgyz-Tajik border resulted in the death of military personnel and three civilians, including a 13 year-old girl Madina Rakhmatzhanova. What started as a conflict between the villagers over the distribution of water turned into inter-state conflict with victims on both sides who were wounded by mortar fire and/or lost property and faced displacement. Within four days, two governments met in Batken region and held multiple talks for ceasefire. In the meantime, population from both sides organized raids on cross-border communities, looted property and violently attacked people from another ethnicity.

While the dust seems to have settled, it is important to understand why such violence took place. The conflicts between border communities are not new. In 2015, 2019 and 2020 residents clashed over the installation of security cameras, road construction and irrigation infrastructure. Water distribution between two countries is aggravated by two legacies of the Soviet Union, the border demarcation and irrigation infrastructure, which continue to inflame economic conflicts turning them into inter-state and inter-ethnic low intensity warfare.

In the 1920s Soviet Union was actively involved in introducing Communist ideas to Central Asian people. The problem that it faced is that the people were not living in organized states except for the remaining Khannates of Bukhara and Khiva, which violently opposed incorporation into the Soviet statehood. Once the creation of the Soviet Union was complete in 1923, Soviet government faced a problem with borders in Central Asia since people did not live according to the straight lines and spoke multiple local dialects switching from one language to another. Driven by the desire to recognize the national aspirations and ethnic differences of the communities on the ground in stark juxtaposition with European colonial settlers, Soviet authorities preferred to respect the complexity and allow existence of multiple exclaves and enclaves in the most densely populated areas in Central Asia, the Ferghana Valley. Enclave is a portion of territory whose inhabitants are distinct from the larger majority. Enclaves can be exclaves if they officially belong to the country, which these minorities are citizens of. As a result, the map of Central Asia looked highly complicated with Uzbek, Tajik and Kyrgyz minorities living across the borders.

During the Soviet times when everyone lived in the same country, the Soviet Union, enclaves and exclaves were only administrative units that belonged to different statistical bureaus. After the independence, keeping ethnic groups from neighboring states became difficult. So local governments offered a choice of citizenship to these minorities. As a result, Uzbeks became Kyrgyz citizens, Kyrgyz became Tajik citizens and vice versa. Some enclaves became exclaves, such as Vorukh, Sokh and Shakhimardan. In enclaves and exclaves minorities remained enclosed in unique geographical spaces. They were not resettled or assimilated. Now the problem is what to do with them? Governments of Uzbekistan and Kyrgyzstan have agreed to exchange territories with enclaves, but the solution of exclaves is more difficult. There are three options on the table: first to ensure connections and make these connections parts of international/sovereign territory. Alternatively, it is possible to open borders for everyone in the region to travel freely, in line with ECOWAS, where internal passports allow border crossings without registration. And lastly, the exchange of territories, which is controversial since properties will have to be compensated and moved to another location, straining not only government budgets, but also putting pressure on the local communities that will be receiving influx of people. 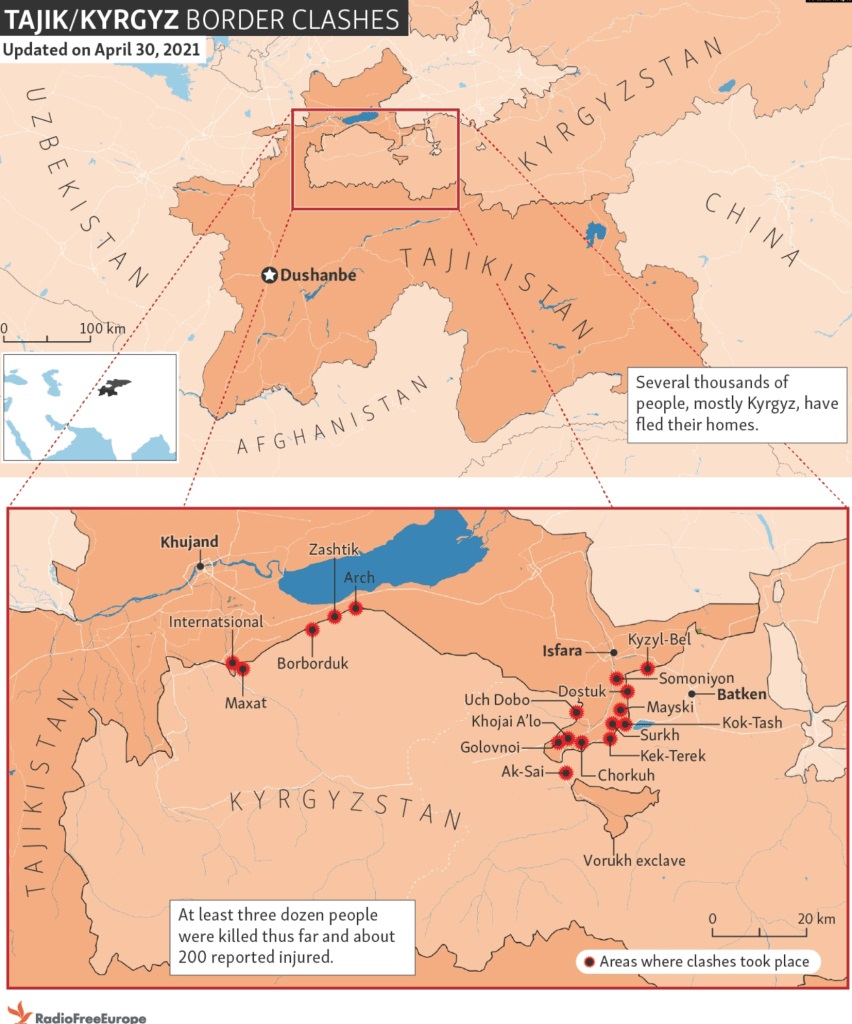 The second legacy of the Soviet Union is also administrative. In order to engage population in productive labor, Central Asian people were growing cotton, rice, and other agricultural goods for the domestic consumption within the Soviet Union, as well as for export. For example, Uzbekistan produced 90% of all cotton in the Soviet Union. Tajikistan and Kyrgyzstan, the mountainous states supplied irrigation water in the summer in exchange for coal and natural gas supplies in winter months from Kazakhstan and Uzbekistan respectively. Irrigation infrastructure that remained transnational to this day was a source of conflict. Since the agreement reached under the Soviet Union in the 1980 the water distribution center, Golovnoy, was delivering 37% of water to Kyrgyzstan and 63% to Tajikistan. With dry season and scarce water resources local people started to blame each other with Tajik population trying to install a camera at the distribution center officially controlled by Kyrgyz municipality. As a result, Kyrgyz municipality treated such act as an infringement on sovereignty, while the Tajik population perceived such actions in bad faith and a confirmation that water is not distributed in line with the previous agreements. In addition, April declarations by Kyrgyz officials about the intention to construct another dam on Isfara river faced angry response from the Tajik President Rahmon who expressed fear that such unilateral act may leave Tajik farmers without necessary water resources.

The violence at the border and the continued transnational water distribution that remains in place for 30 years after the collapse of the Soviet Union point to the lack of appropriate attention to the problem by Central Asian states. The lack of adequate solutions poses an ongoing threat to the regional peace and security since economic conflicts continue to acquire ethnic character and are framed in the language of national and sovereign interests.

The situation at the border remains stable for the time being, but hundreds of people from both sides have been evacuated, and their houses, livestock and property have been looted. Calls for international involvement multiply. A resilient solution to the problem should involve transnational communities in the management and distribution of water resources, as well as transnational communal engagement against the threats from other natural disasters that periodically appear in the region.